Design Story: A Blush Pink Bedroom for a Blogger’s Workspace 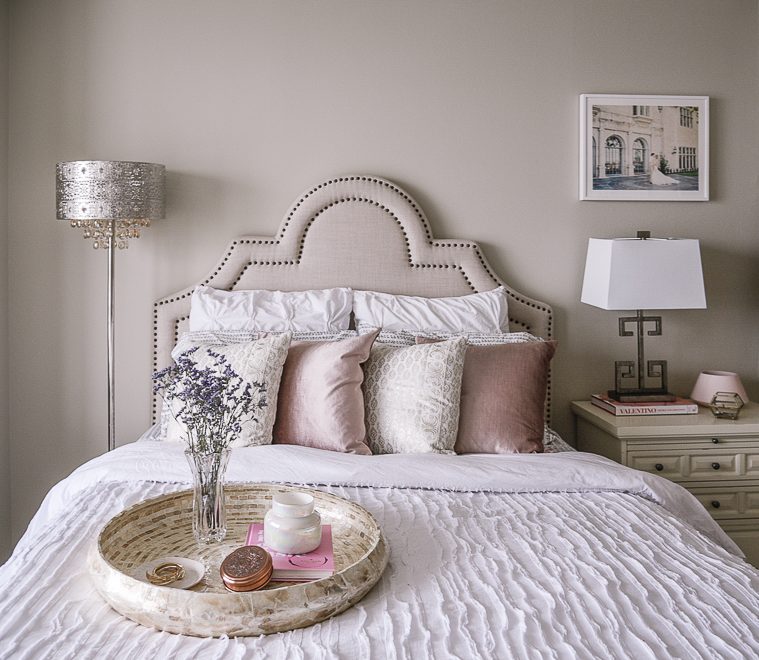 WORDS BY The Havenly Team

In case you missed the memo, pink is in. But a pepto-bismol colored paradise isn’t for everyone, and like any good interior designer on our team, Stafford knows when to dish it out and reel it back in. Working on her second bedroom project with Jenna Colgrove of Visions of Vogue, Stafford had two options – go grey like she did in the Master Bedroom project, or choose something different. Something on trend, but not too garish. Something that would still appeal to the neutral-loving heart of Jenna, and work well for her hybrid guest bedroom/blog workspace. A blush pink bedroom design was already brewing in Stafford’s brain, and she knew exactly how she was going to make Jenna fall in love with her guest bedroom.

First things first –  Stafford and Jenna needed to settle on an initial direction for the design. Jenna knew she didn’t want this design to match too closely to her master bedroom, but she also knew that she wasn’t the type to settle for an explosion of bubblegum hues. Instead of trying to make pink the star of the design, Stafford went with a cooler, more neutral palette to preserve the element of sophistication that Jenna gravitates to so much. Her first three design ideas for a blush pink bedroom gave Jenna plenty of options to choose from: 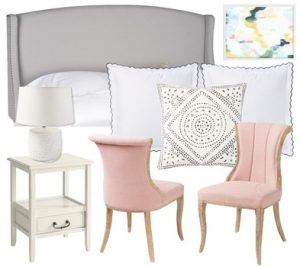 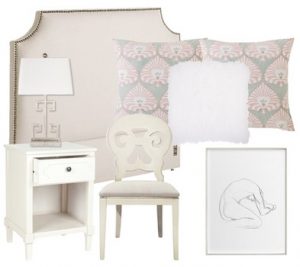 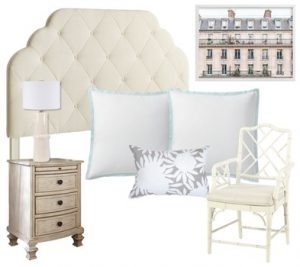 Notice how Stafford incorporated a subtle touch of blush into each design. It’s just enough to keep the designs from feeling too washed out or monochromatic – but she didn’t stop there. After moving to the concept phase, Stafford started to incorporate decor elements that would really make the blush pink bedroom stand out. Using metallic accents and heaping in plenty of crisp white basics to appease Jenna, Stafford began narrowing in on her vision to put together the most sophisticated blush pink bedroom possible. 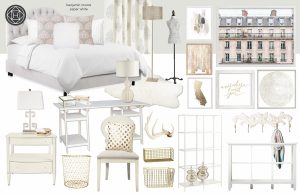 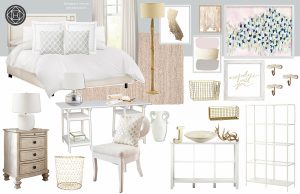 You might be thinking to yourself – where was Jenna in all of this? Didn’t she have something to say about Stafford’s vision of a blush pink bedroom design? As a full time blogger who still maintains her 9-5, Jenna Colgrove’s time is exceptionally valuable. But that didn’t stop her from giving feedback and direction on all of Stafford’s ideas. Both she and Stafford had developed a strong rapport from finishing the master bedroom project, so it wasn’t hard for her to pinpoint areas of the design she loved and ones she felt needed a little bit more work. See below for some of her best pieces of feedback throughout the process:

“I uploaded inspiration photos with comments! Figured it was easier than messing with links. They’re all really similar but honestly I’m not feeling really picky about this second room (plus I love your work, so I’m not worried AT ALL). I just want to have fun with it and ultimately create a space that lends itself well to generating home content on a regular basis for the blog (and is functional).”

“I like the #2 and #3 headboards (#1 is too square) ☺️! And yes on the white bedding – you know I love white! I’ll challenge you to find me a quilt that doesn’t remind me of a grandma though haha!”

“I marked all my favorites! I’m not wild about either set of curtains or the pillows – I don’t know why. They’re cute! But something is off. I guess I’m going for a little more boho glam than your typical cutesy office space which is what the printed pillows seem like to me… I think it looks great – I might just be looking for one statement piece or a pop of color somewhere?”

Jenna’s willingness to share her true thoughts about the design made it easier for Stafford to tweak defining elements and ground the overall vision so that it fell in line with Jenna’s taste. When all was said and done, the girl who said she’d never been “in” to pink was swooning over a cool, collected blush pink bedroom worthy of her high fashion tastes. See the full reveal below!

Are you surprised by Stafford’s ability to make blush pink seem stately and mature? Or did you know all along that she was capable of such a feat? We’re never surprised by Stafford’s skills  any more, but we might be a little bit spoiled. If you think you’re ready to get inspired, check out the rest of our talented interior design team. Your style soulmate might be closer than you think!