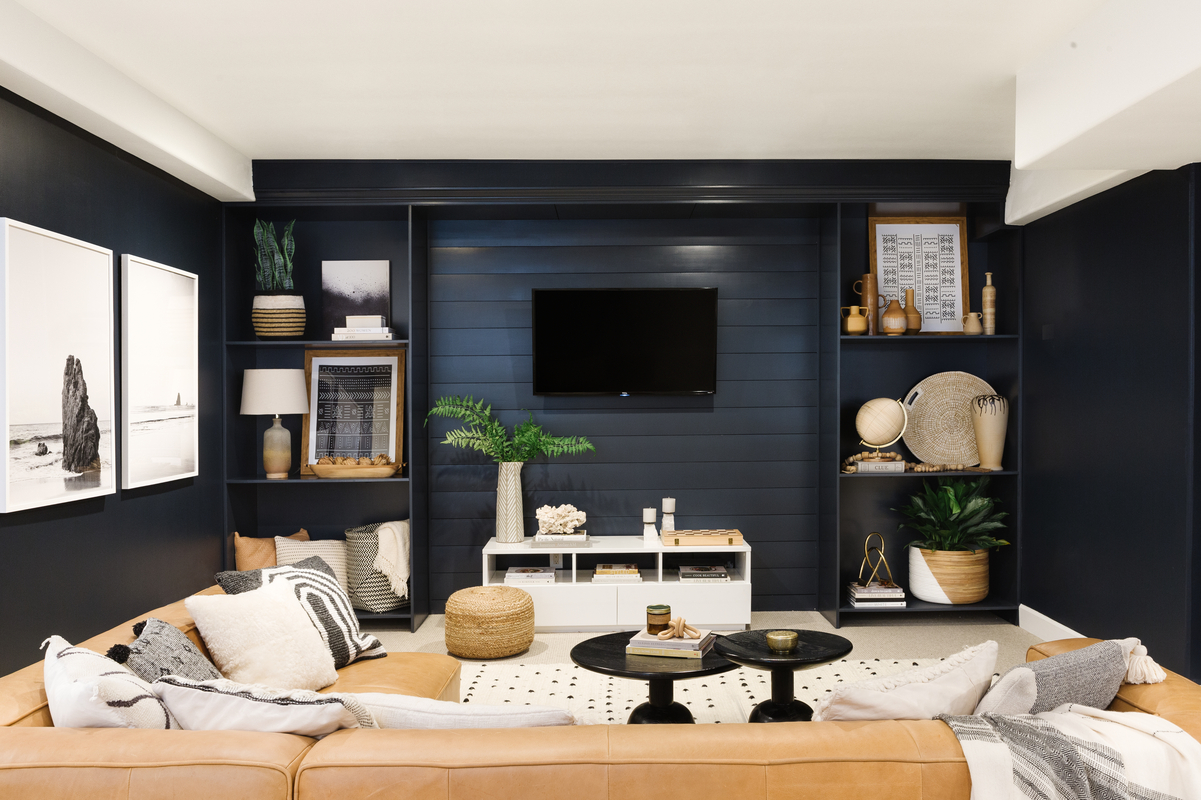 HGTV, Bravo, Food Network, cable news, Netflix series (from Queen’s Gambit to Bridgerton)  — we all have our binge-watching and cinematic vices, which means having a television in the living room is a reality… even a necessity. Televisions have come a long way from the giant, bulky boxes, but there’s still a lot of debate around how to actually incorporate one in your space in a stylish way.

But we promise, it can be done. If you’re the kind of person who wants (or simply needs) a TV in the living room, Havenly designer Kelsey Fischer has a few ideas to keep it looking chic. 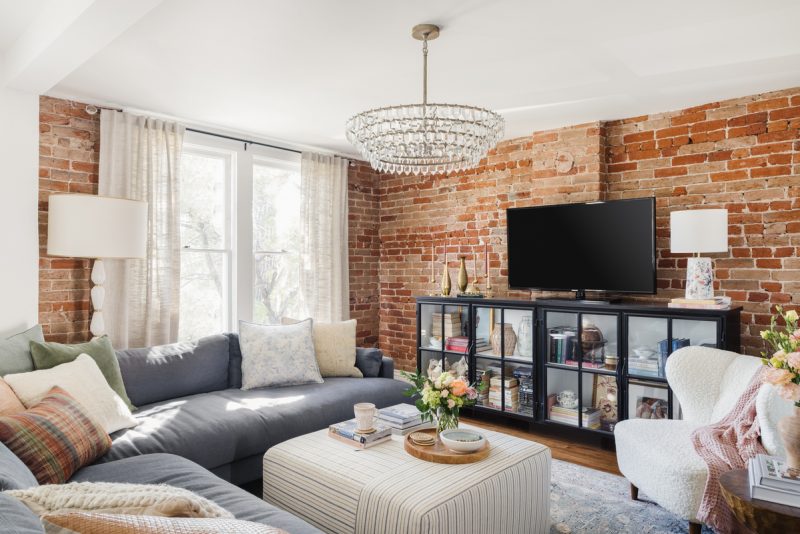 If you can’t mount your TV to the wall, you can still bring real impact to the space by staging your TV on top of a stylish storage piece, Kelsey says. “It doesn’t have to be designed for media — you can use a buffet, dresser or sideboard to give you the same amount of storage, or maybe even more storage, than a traditional media console,” she says. By expanding your search to include pieces meant for other rooms of the house, you’ll have more options to find a console style that’s right for your storage needs and the look and feel of your space. You can even consider a glass paned buffet to showcase your literary collection, treasured heirlooms, and other stylish artifacts.

Mount Above the Fireplace 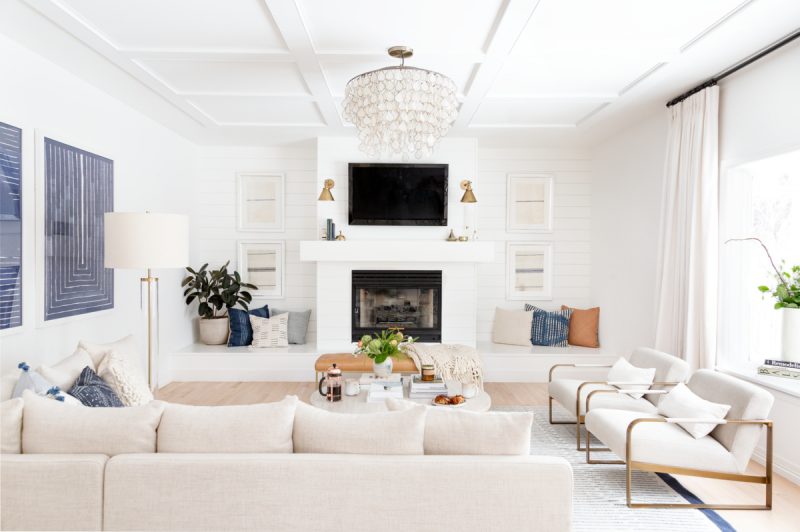 “The fireplace used to be the gathering point of the traditional living room, but that gradually transitioned to the TV as technology progressed,” Kelsey explains. “Instead of moving away from the fireplace, or dividing the flow of the room by having the TV next to the fireplace, try to integrate the two. Mount the TV over the fireplace to create flow while adding a modern focal point that feels inviting.” This way you can transition the space from cocktails and conversation to a cozy movie night with style and ease.

Pro tip: install a Samsung Frame that can double as artwork, and flank with two sconces. Promise, they’ll never know it’s a TV. 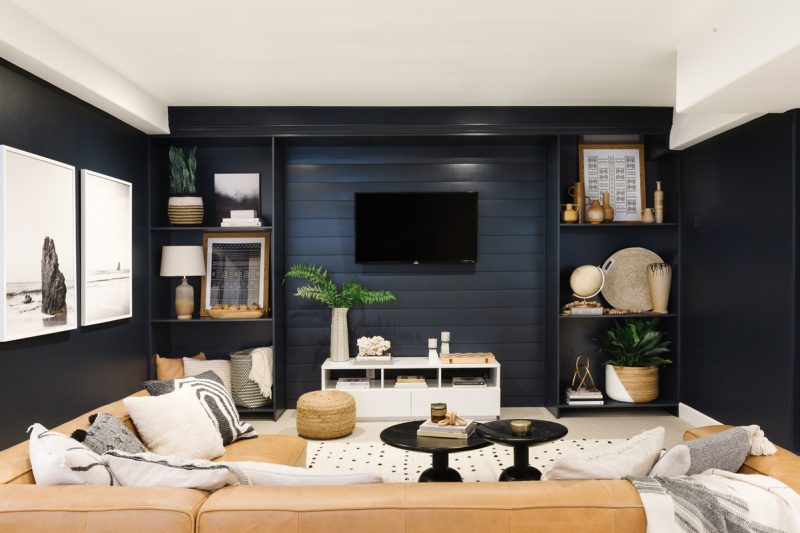 Rather than trying to hide the TV, style it up in a surprising way. “Sometimes, a TV on a big white wall can feel very stark and draw too much attention to the TV itself,” Kelsey says. By creating a bold accent behind the TV, you can help integrate that element into the design of the room while also creating a designer feature in your space. “Adding wallpaper or a bold color can add so much dimension and depth to your room while incorporating your media elements beautifully.” We’re partial to this example of Benjamin Moore Hale Navy that seamlessly blends with the TV. 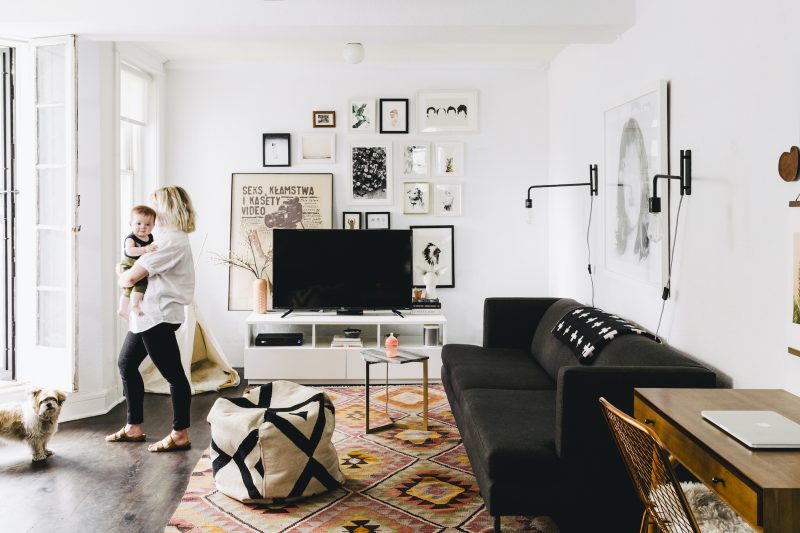 Did you know you can integrate your TV as part of a gallery wall? This adds style and dynamism to the area while also making it feel cohesive rather than an out-of-place extra. “By adding art pieces, photos or wall decor, you create a beautiful accent wall where your TV feels like it belongs rather than standing out or drawing too much attention.”

Have a design dilemma? Our designers are standing by with all the clever tips and tricks. Match with one whose style is right for you by taking our design style quiz.

4 Ways to Use Accessories to Decorate Your Home

How to Create a Thanksgiving Dinner Table Setting