For the thoughtful minimalist, the harmonious balance of Scandi Mid Century style can really maximize a space. While Scandinavian and mid century styles have been trendy in their respective rights for some time, their marriage brings a fresh new approach to designing a well-appointed room.

At first glance, this is a look that seems easy. As long as you stick with clean lines and a retro vibe, you should be all set, right? Not so fast—there’s much more nuance to Scandi Mid Century, which Havenly designer Brady Burke was happy to explain.

“Scandinavian and mid century-inspired spaces differ in their approach to light and dark, so a fusion of the two creates a sleek, streamlined, and balanced look,” says Brady. Think natural wood details with contrasting black and white accents, for one. “This style is all about cohesion and creating a harmonious space with intentional contrast.

OK, ready for the recipe. Here are Brady’s five essential elements to create a Scandi Mid Century look in your home.

Neutral Spaces with Warmth and Contrast 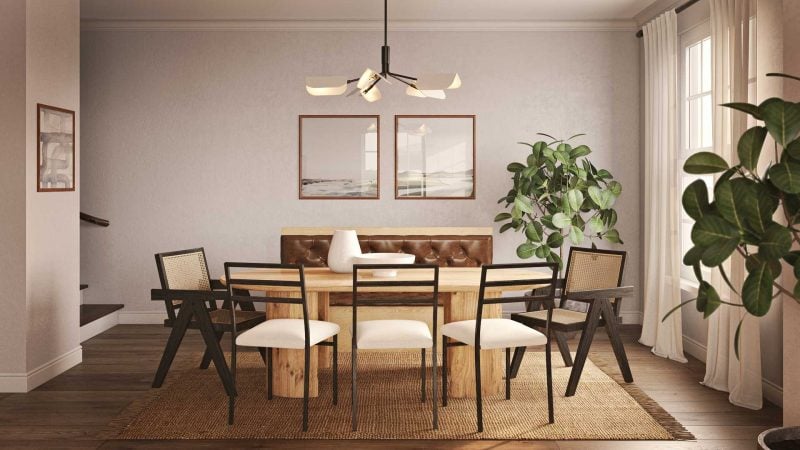 To give a room the right amount of depth and dimension, Brady goes for heavy contrast that plays with light and dark. A hallmark of Scandi Mid Century design, he says, is its purposeful nature—spaces that feel intentional with nothing out of place. The result? Cohesion that’s calming, punctuated by striking contrast.

A classic tell for Scandinavian design harkening back to the 1950s are flared wood legs on tables and upholstered furniture. It’s a feature that’s endured, giving a room a timeless, sophisticated feel. Bonus points for real wood.

Brady’s picks for flared-leg pieces include a cream armchair, nesting tables and a round coffee table—all in warm, natural wood finishes.

Offsetting minimal furniture and statement lighting overhead are rugs packing a punch with pattern. Sticking with the overall neutral palette but offering up the requisite contrast that characterizes the style, a bold rug sets the stage for true Scandi Mid Century style.

One theory Brady has for the style’s growing popularity is all the time spent hunkering down lately. “Havenly clients have always leaned into midcentury spaces and as we spend more time in our homes, we strive for clutter-free, clean, & bright environments,” he says.

Leaving the chaos outside and cultivating a haven of calm at home certainly sounds like a recipe we can live with. 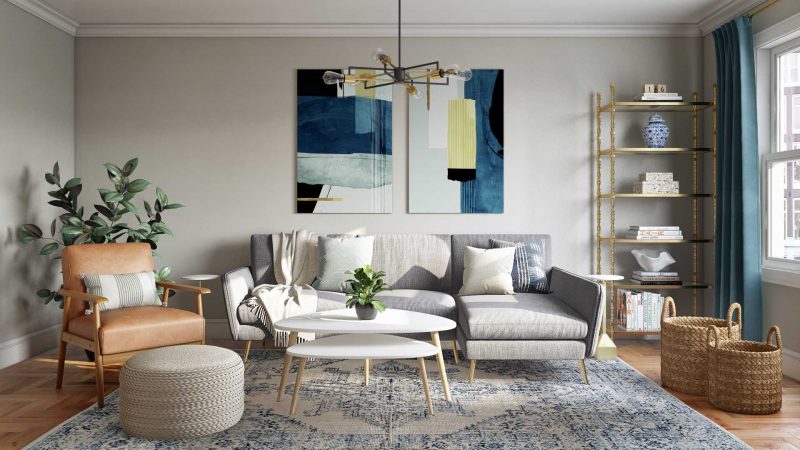 Despite the emphasis on the neutral backdrop, color is still allowed. But, like everything else Scandi Mid Century, it must be intentional. “You don’t have to avoid color,” says Brady, “but you should focus on naturally occurring colors that play into the neutral palette.” Think watery blue, earthy green, or even sunny yellow tones that pair well with the contrast of brown, black, and white furnishings.

Strike your own perfect balance with help from a Havenly designer. Start by taking our style quiz.

We Tried This Home Decor Trend That’s All Over TikTok: Here’s What Happened

Calling All Book Lovers: 11 Designer-Approved Secrets to Organize Your Bookcase