From the runway to our hallways, there’s a not-so-new palette dominating the fashion and home scenes: earth tones are in again. “Earth tones, not surprisingly, come from elements of the great outdoors—the sun, greenery, sand, soil, stormy skies. They all contain some brown pigment, which explains their muted appearance and why they often have a cocooning effect on spaces,” says Lead Designer Vivian Torres, who’s dishing on some of our favorite earth tone color schemes. “While they invoke feelings of calm and comfort, they also invoke feelings of warmth and richness,” she adds. Perfect timing, cause we’re craving the fall cozies.

The spectrum of earth tones ranges widely from tan to terracotta and dull to bold, and can be used in a variety of ways when it comes to design, including as subtle pops of color or the grouping of similar hues. The key to making an Earth-tone palette work, though? “Layer in enough texture for depth and contrast,” says Vivian.

If the idea of a bold terracotta or rich, earthy green seems too far out of your comfort zone, fear not: there are plenty of subtle, neutral Earth tones that you can make work in your space. Take the timeless combo of charcoal and chocolate, for example. As Vivian puts it, “Varying shades of brown, tan, and cream mix with grounding pops of charcoal for a refined, chic take on cozy rustic living.” It’s a perfectly understated palette that adds undeniable warmth.

As you might imagine, coffee-inspired browns and straight-from-the-spice-rack-reds offer a ton of warmth and are super rich in color. (Think: old Italian villa or Santa Fe abode.) Use this combination for a dreamy aesthetic that has you ready for a nap in the Sunday afternoon sun. “Warm wood finishes and brass metal details that show up in this color scheme balance out the richness of the bold and spicy red accent color,” explains Vivian. “I also love how the rug, which uses both colors, unifies the design to perfection.” 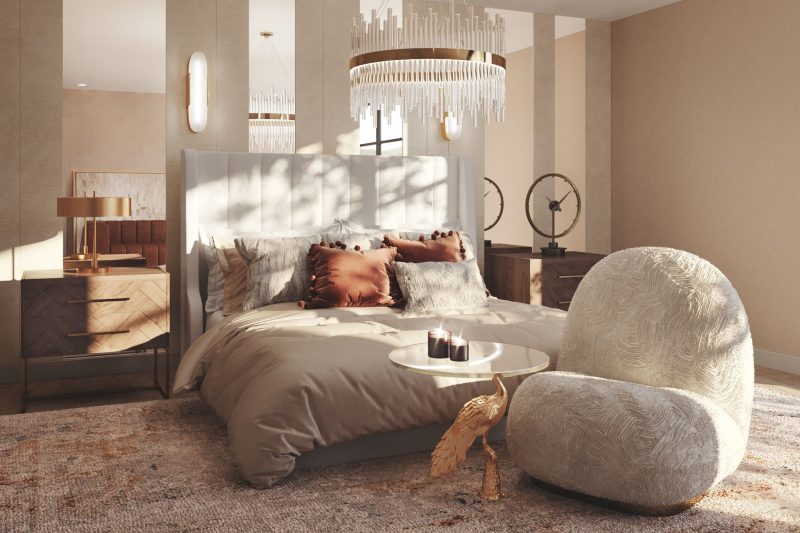 If you’re feeling a bit bolder or need a little more contrast in your space, resorting to color theory is always a smart place to start. This is also a great reminder when choosing colors that “warm” and “cool” don’t mean certain colors only but rather the underlying hues within a shade. “Blue and orange are complementary colors, so they typically work well together in any shade. But the particular shades used here are especially captivating. The deep navy accent wall is reminiscent of a stormy night time sky, and it contrasts beautifully against the light beige upholstery of the bed,” Vivian reveals. “Moreover, the addition of terracotta hues and cognac leather details enhance the contrast creating a dynamic yet comfortable composition.”

Be assured there’s always a sweet spot between wanting the best of the neutral and color-popping worlds. If both concepts appeal to you, don’t feel you have to choose one or the other. This combination of black, white, and ochre is a perfect example of creating comfortable spaces that still have exciting moments. Vivian shares, “Ochre is a unique and underrated earth tone accent color that makes designs feel luxurious, and here the color stands out beautifully because of the intelligent use of black, white, and dark grey. This palette makes the space feel both vibrant and sophisticated—a difficult design balance to strike.”

“50 Shades of Sage” is more our speed when it comes to entertainment. Sign us up when that flick is available so we can swoon over a color that seems to be perfect in every way. Note here how well the varying shades of sage coexist with brighter whites and light-colored wood accents; every part of the room, from the desk to the bed to the tasteful seating area tie together seamlessly but also boasts significance on its own. “Sage blends well with misty hues to create a soothing, outdoor spa-like ambience, and appropriately placed textural elements and pops of eucalyptus help break-up the potential monotony of the color palette,” says Vivian.

Of course olive and bronze are some of our go-to shades when creating warm vibes within a space. Plus, they complement each other so effortlessly. According to Vivian, “Warm neutrals with yellow undertones combined with metallic accents create a sun-filled backdrop that’s stylish and inviting. A pop of olive green in the artwork adds a cohesive, grounding touch for a well-balanced casual luxe aesthetic.” Add in a vibrant houseplant and a few rich, leather ottomans and let the space invite you in to kick off your shoes and stay a while. 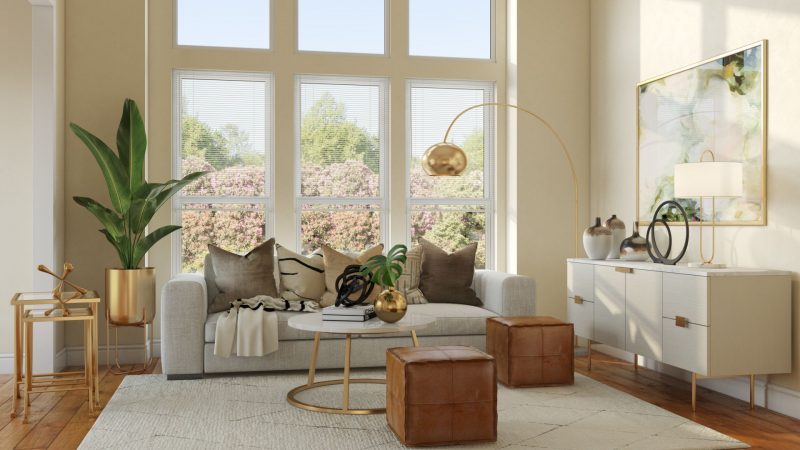 On the softer side of earth tones, dusty blush and taupe pair together quite nicely for an elegant-yet-warm aesthetic, which we feel lends itself easily to classic and transitional design. “A mix of these tones with rich wood finishes and a contrasting pop of black in accent pillows creates depth and intrigue, but still works as a cohesive look,” describes Vivian. “The different textures—from the marble coffee table to the velvet curtains—add a layer of sophistication to the design without making it feel too formal.”

Feeling inspired to weave one of these color schemes into your home? Our designers can help hand curate pieces in your earthy palette-of-preference. Get started with our style quiz.

Coastal Dining Room Ideas That Will Channel the Breeze

How to Make the Most of Transitional Spaces

Love It Or Leave It: Our Designers React To The Latest Trends of 2021